We had some really bad weather here in Ohio!  When that happens, and I am home bound with all kinds of materials in my 'crafting lair', this happens.  I didn't expect to make this set, but there you have it.

Every librarian should have a personal collection of story boards of classic tales.  They can be used with several age groups and with many themes.  They also are great for re-telling!  Every time I tell one, someone tells me I am doing it 'wrong'...it starts a great conversation on making stories your own!  I used this classic tale in my BEARS STORY TIME which you can see HERE.

The illustrations are right out of this book: 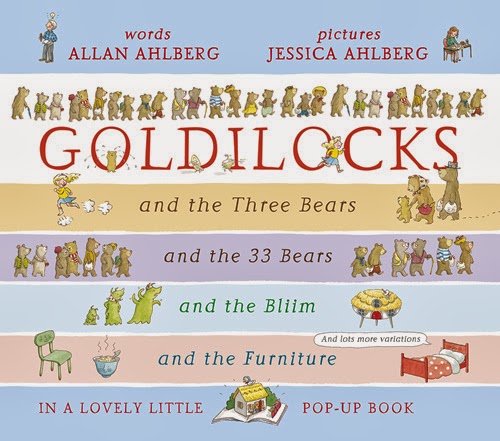 Unfortunately for story time, the images in this book are smaller than a thumbnail!  I think the pictures are adorable, so I decided to make a felt set.  My daughter Sarah, my artist, hand drew the pictures on a larger scale.  Papa bear is approximately three inches Mama bear 2, and Baby Bear a little more than an inch and 1/2, just for perspective. 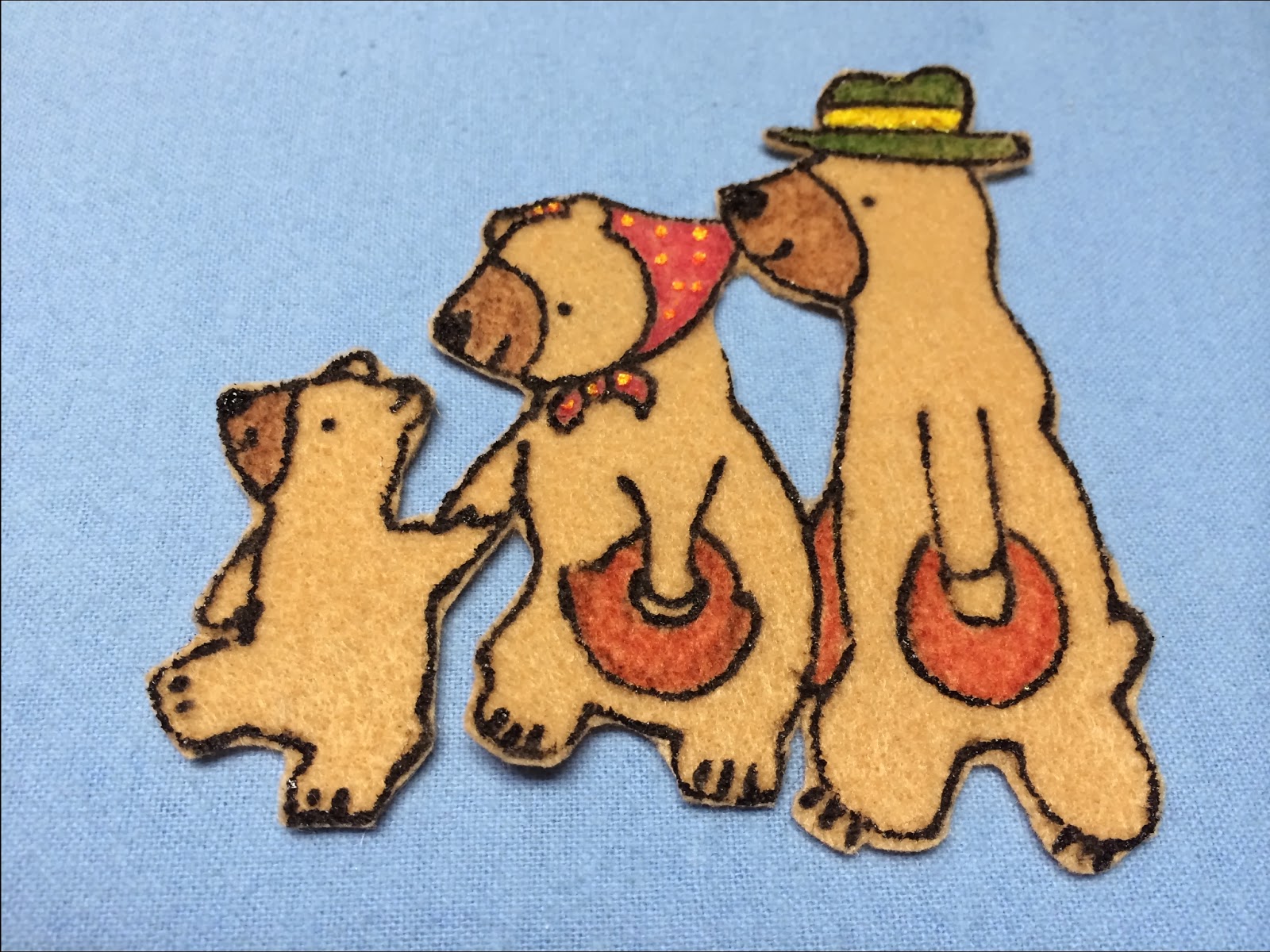 Of course, the Three Bears decide to leave their porridge cooling and go to the market. 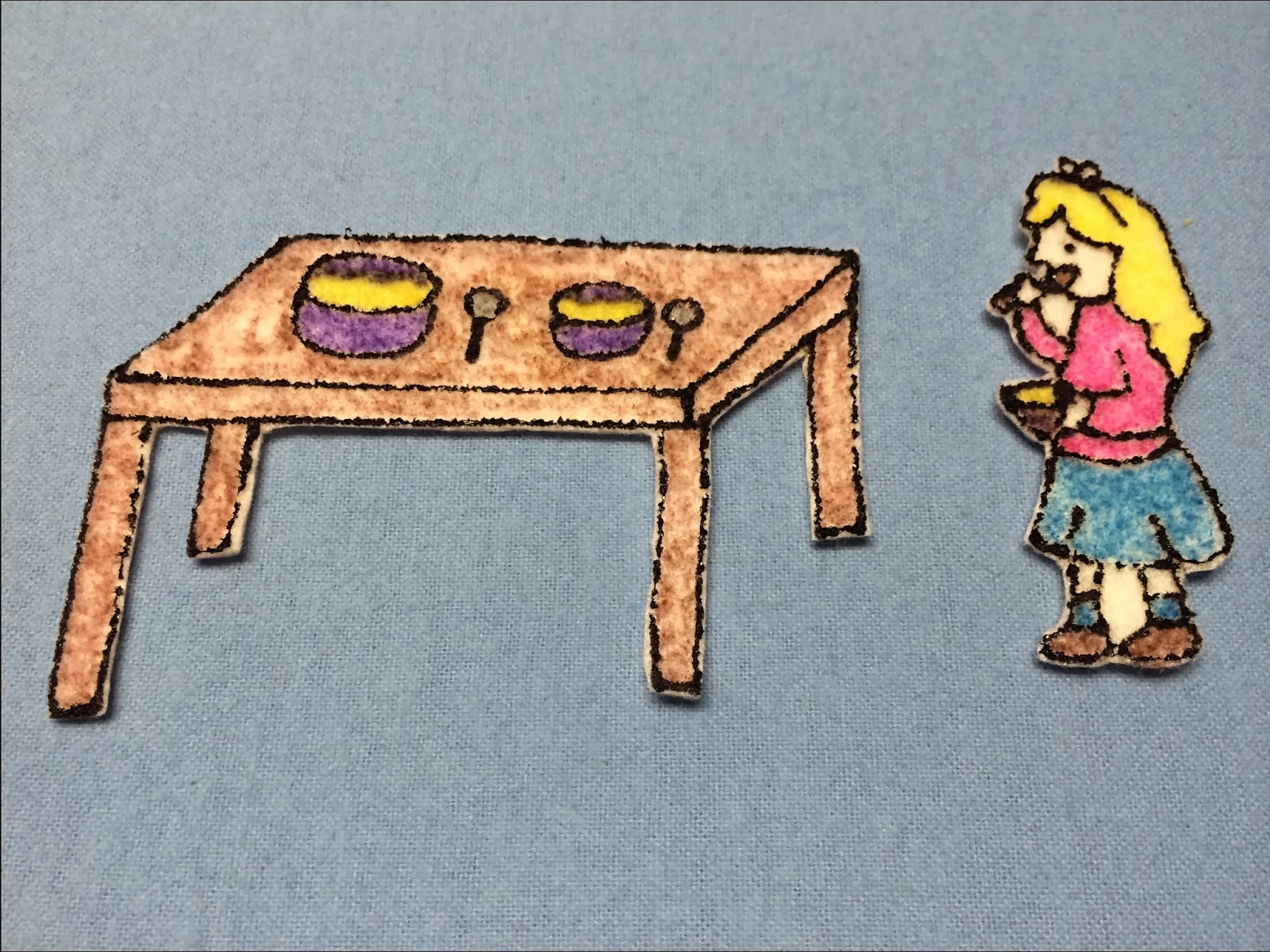 Goldilocks comes in and, smelling the porridge, decides to try it out.  One was too hot.  One was too cold, and one was JUST right.  So she gobbled it up! 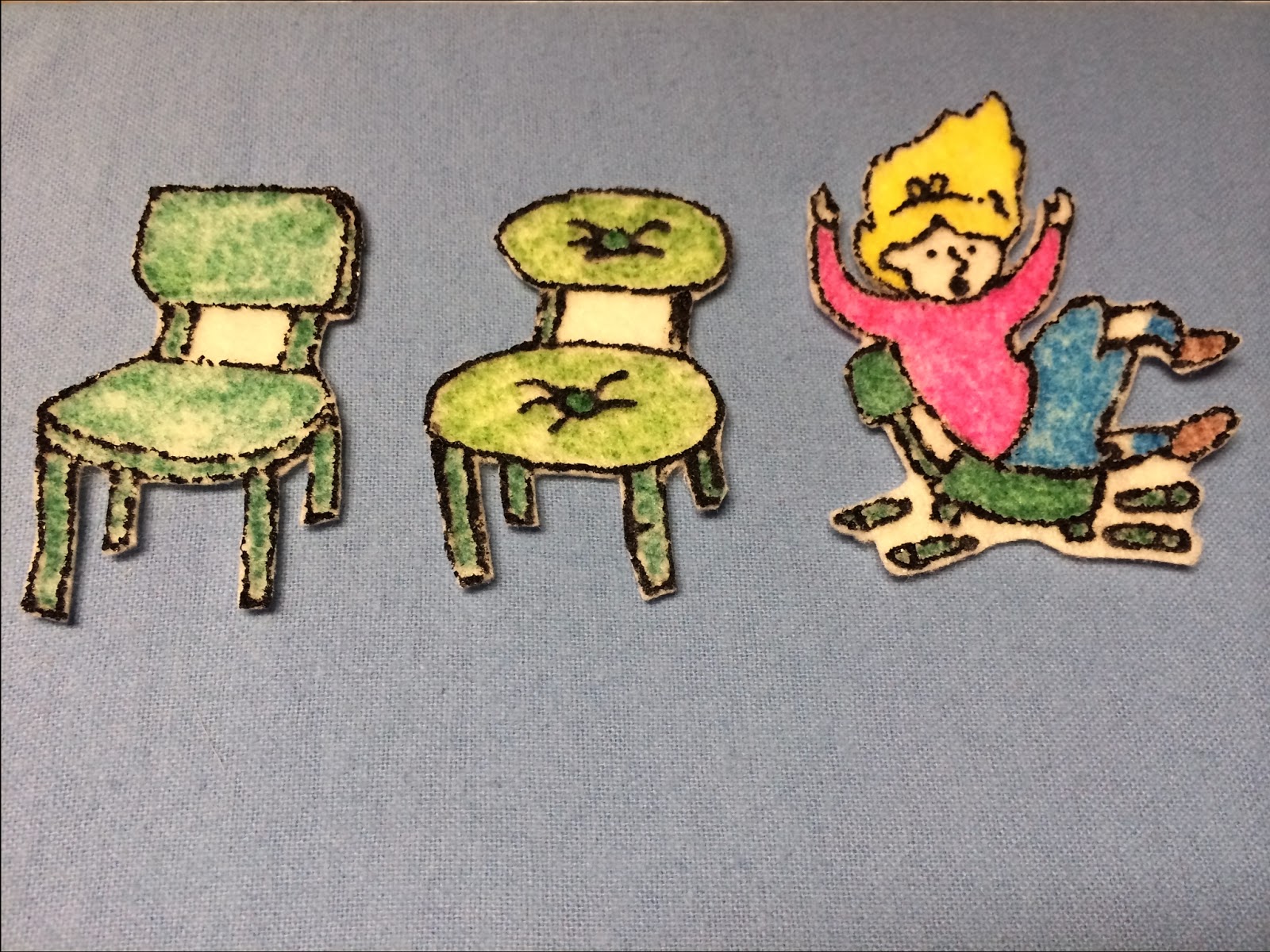 Spotting the chairs by the fire, Goldilocks decides to have a seat.  One was too hard, one was too soft, and one was just right.  So she sat down but broke it! 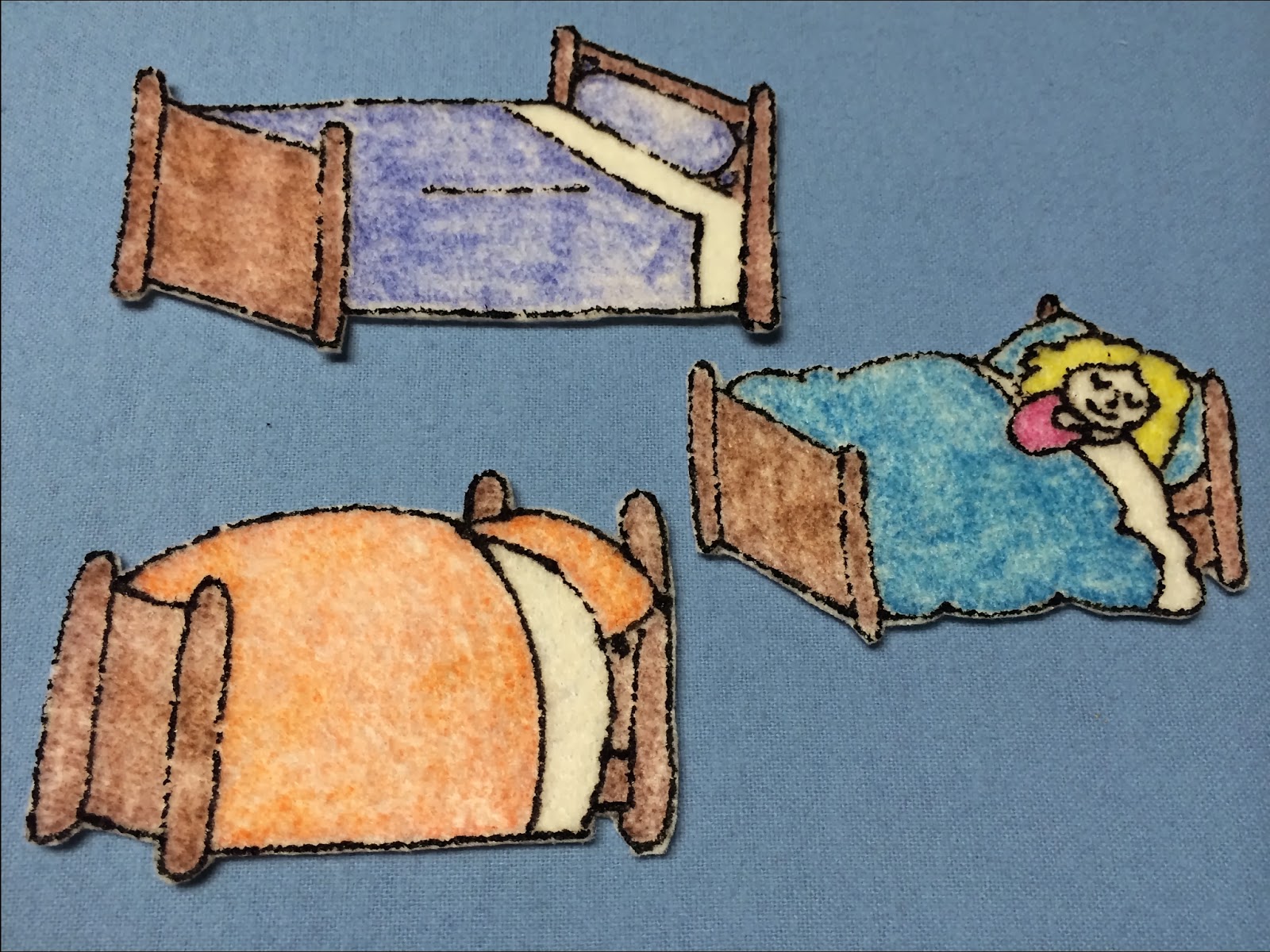 I changed things slightly here....Goldilocks became sleepy from the porridge so she went into the next room where she saw three beds.  One was too fluffy!  One was too firm!  But the last one was perfect and soon she was fast asleep. 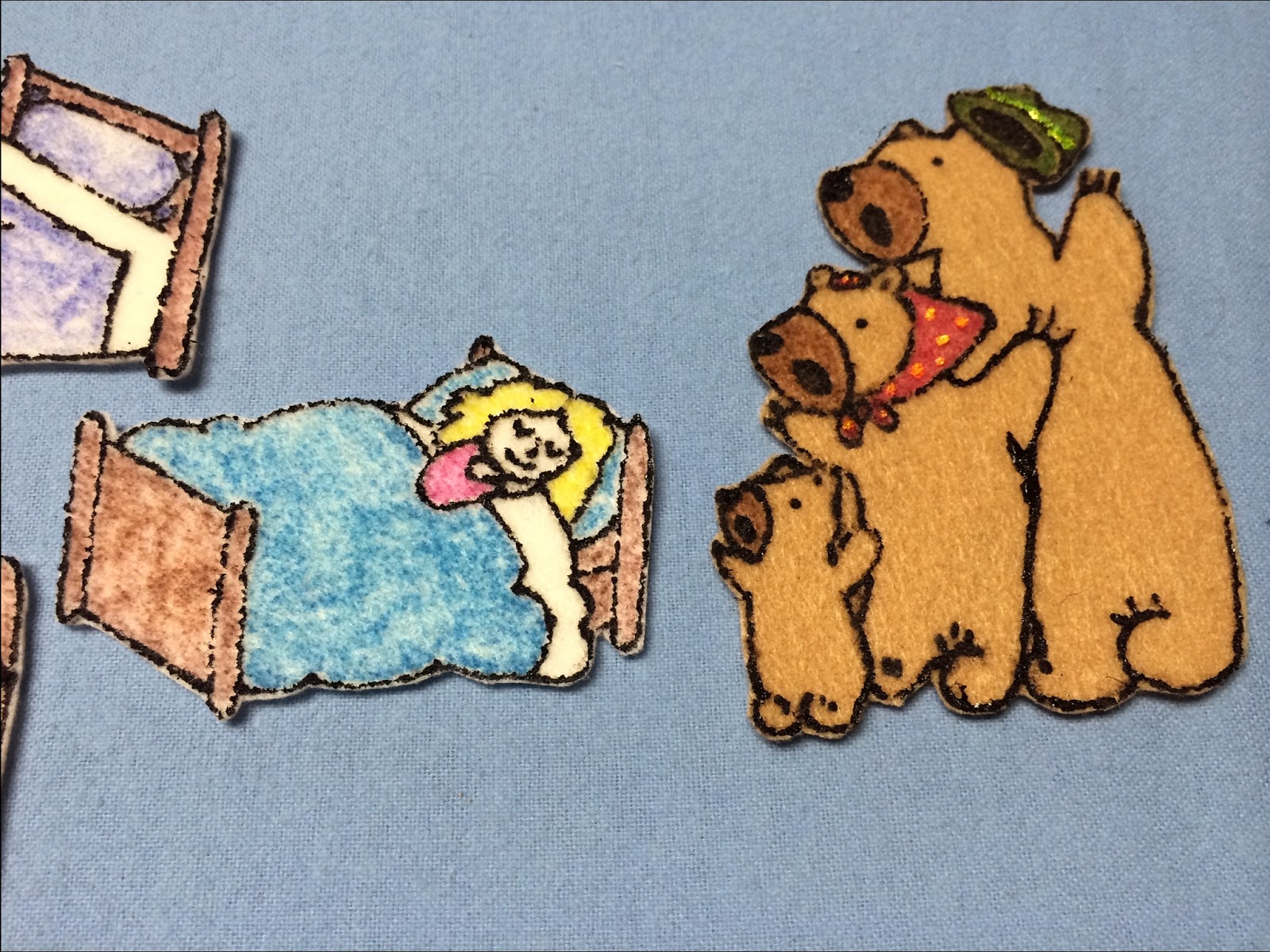 The bears came home.  "Who's been eating my porridge?"  They said one by one!  "Mine is all gone!" Baby bear said. Then they saw the chairs.  "Who's been sitting in my chair?" they said one by one. "Whomever has been sitting in my chair has broken it!" said Baby Bear.  Then they went into the bedroom.  "Who's been sleeping in my bed?" they said. "Someone's been sleeping in my bed...and she is still there!" said Baby Bear.  This woke up Goldilocks, who went screaming out of the little cottage and never came back!

Ok, that was seriously paraphrased but you get the idea.  Everything but the bears was drawn on light peach colored felt and colored with marker.  The bears were drawn on tan felt with puffy paint and marker to fill.

A big THANK YOU to Jenna at Stories with Ms Jenna for hosting this week's Flannel Friday!  If you would like to learn more about Flannel Friday, Click HERE!  Thanks for stopping by!!
Posted by Miss Sue at 8:09 AM