I don't know about you, but the January-March holidays seem to be my rough months.  Mostly because the books for story time with a theme of an early year holiday (such as Chinese New Year, Easter, Valentine's Day, Groundhogs Day, President's Day, or St. Patrick's Day) aren't always plentiful or easy to read in a group.  I like to play homage to the holiday du jour though, so I try my best to work around the books and use more songs and dances or a great craft.  Being an Irish lass from Boston, I could not skip St. Patrick's Day no matter what, so here we go! 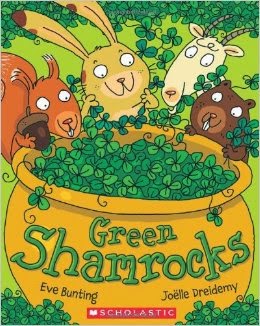 This one is cute and eye catching for the kids.  It's also an opportunity for counting, animal sounds, or general conversation. Sometimes holiday books are just too long for preschoolers, but this one seemed to do the trick.


Musical Interlude - The Unicorn Song
I have known The Unicorn Song and all of the hand movements ever since I was a little kid.  I understand it might not be familiar to you (as I have discovered while living in the mid-west by the blank expressions on some faces!).  The original poem is by Shel Silverstein and the song was made famous by the Irish Rovers in the 1960's.  It still makes the circuit in Irish Festivals around the country however.

Jim Cosgrove does an EXCELLENT version for kids.  At the end he gets faster and faster which was very fun in the Kindergarten classroom of the school where I once worked.

I sang the song A Capella so I could first teach it a couple times and sing it nice and slowly.  I'll let you Google the hand motions on Youtube, but here is what I do:

Song: Unicorn Song
Chorus:
There were green alligators (extend arms like long gator mouth)
And long neck geese (fluff your neck feathers)
Humpy back camels (put your hands on your back as humps)
And Chimpanzees (make chimp arms)
Cats (ears), and Rats (whiskers), and Elephants (one arm is trunk while the other arm supports the first arm)
As sure as you’re born (cradle baby)
But the Loveliest of all was the Unicorn. (Show your best horn!)

A long time ago when the earth was green, there were more kinds of animals than you’ve ever seen.  They would run around free while the Earth was being born, and the loveliest of all was the Unicorn! 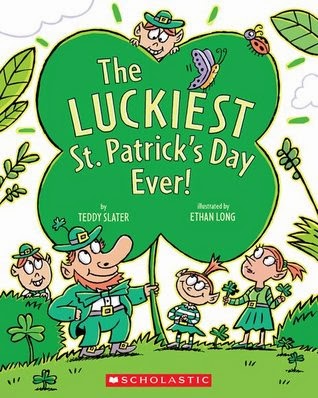 I always enjoy Ethan Long's illustrations!  It also will open up the kids' vocabulary with words like leprechaun, luck, shamrock, etc....sort of like the next book.  My goal of holiday story times are to do just that, increase exposure and vocabulary and talk about culture (and of course make it fun!).

I’m a Little Leprechaun (Sing to the tune of I’m a Little Teapot)
I'm a little leprechaun
Dressed in green, (tug on your shirt)
The tiniest man
That you have seen. (make your index and pointer finger close together)
If you ever catch me,
so it's told, (make like both arms are catching something)
I'll give you my big pot of gold. (hold out hands as giving)

There Was an Old Lady who Swallowed a Clover - Lucille Colandro 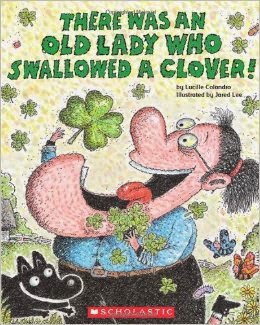 Yet another Lucille Colandro "Old Lady" book making its way into my holiday-themed story times!  And once again I did it in felt!  Here is my set: 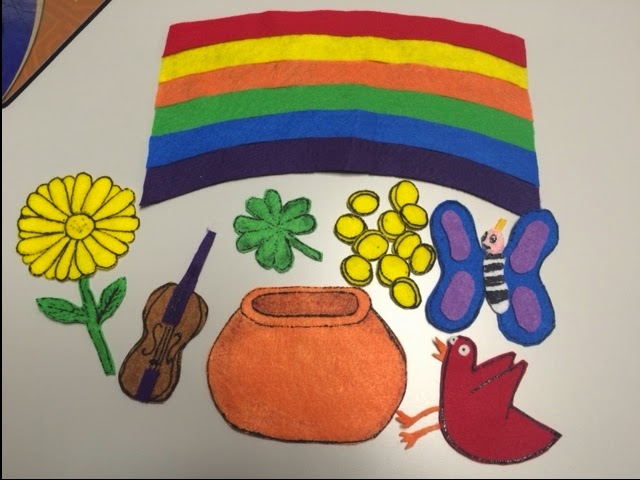 Did you notice my mistake?  Yep - I was in such a rush to finish this set, that my rainbow colors are screwed up.  Miss Kristie was so kind to notice and let me know right before my story time!  Oh well, it was just fine in the end.  There are also several sites that offer more classroom resources for this story.  The one I used was Crazy Speech World.  There are some templates that can be used for sequence and retelling. 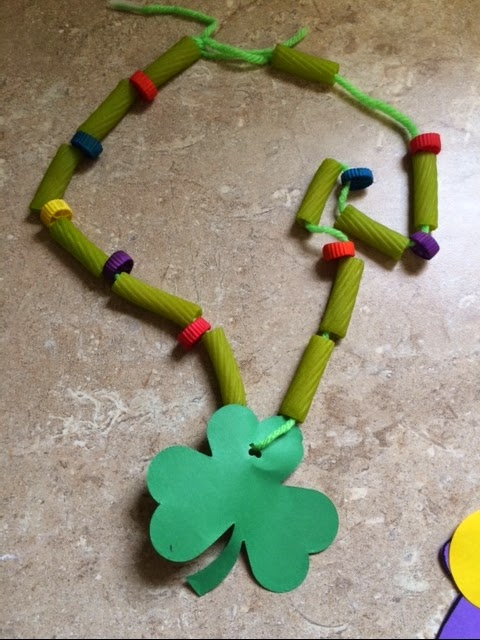 So in line with St. Patrick's Day, we made rainbow colored pasta necklaces.  The kids really love this activity and the parents do too!  I Googled how to make colored pasta - it was easy peasy.  Then I bundled the craft in snack size zippy bags so the kids would have the perfect amount of pasta for their craft.  The shamrock was die cut from green paper.  Here is a tip - tape one end of the yarn to make a 'needle' and tape the other end to the table so the pasta doesn't fly off the other end! 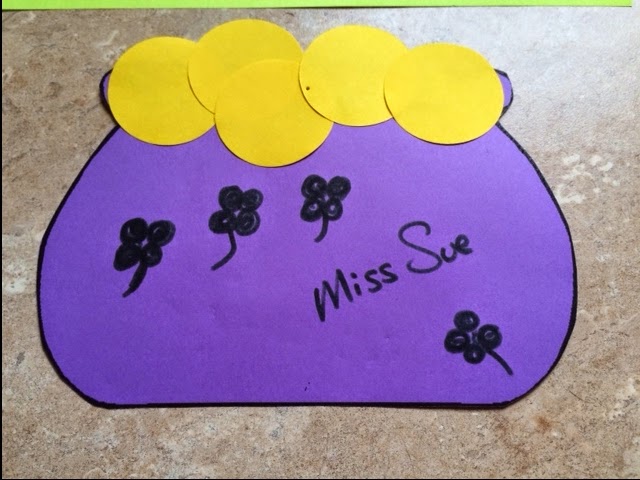 I snitched this one from the DLTK website where they had a template.  Click HERE for that. Some kids didn't want to do the necklace, and some preferred to take the craft home to do.  I used die cut circles (I have a 1 inch punch at home) and black paper which the kids could then use white crayon or chalk to decorate.


Luck of the Irish to ye!  Thanks for stopping by!