On Thursday, September 29, 2016, twenty-one librarians gathered together at the OLC Convention and Expo in Sandusky, Ohio to participate in a Guerrilla Story Time.

What is Guerrilla Story Time, you ask?  Call it a program, advocacy, or a movement of awesomeness! Guerrilla Story Time was conceived by the Joint Chiefs at Story Time Underground and is spreading across North America.  Please check out their website for more.  We thank them for permission and guidance as we brought G.S. to the OLC for our second time.  Library Village, along with a bunch of our new best friends, spent a fun filled hour discussing all things story time.  The hour flew by as the conversation didn't stop for a minute.   Hopefully everyone who participated left with a few new ideas!  We know we did.

Challenge: All the moms are talking in the back – what do you do?
1. Stop and refocus – “Ok, I need everyone’s attention, now!” (Talking to the kids but really talking to the moms!)

2. "I know it’s a great time to socialize, but we’ll have time for that later.  Right now I need you to be a good role model for the kids." (Parents may not know they are being disruptive)

3. Encourage a lot of participation – if you’re singing, you won’t have time to talk!

5. Lower your voice so they can’t hear you until they stop talking.

6. Just stop reading! "I’m sorry, I just can’t go any further until we’re all together."

7. Remove the back row of chairs so parents can’t hide back there.

8. Teachers can be offenders too! "Boys and girls, I need your teachers to be listening as well."

9. Remind parents that their own children may not be able to see them (if sitting in lap), but every other child in the room can see them.  They have to be good role models for all the children.

10. If you are uncomfortable confronting parents, try to make them participate as much as possible.  Tell them you need their help (to make a circle, to sing a song, etc.).

11. "YOU are your child’s first and best teacher!"

12. Allow time afterwards for caregivers to chat while the children play. Make sure they know about this at the beginning.


Question: Do you include a digital aspect in your storytime? How is that received by both the staff and the patrons?

2.  Display words to songs with a PowerPoint or Smartboard – gets parents’ faces up, rather than staring down at their paper.

3.  Freegal for free songs – parents can get to from home

7.  Include an “App of the Week” on your handout, which caregivers can take home

Try not using screen time every week, so the kids aren’t expecting it when they come.


Ask your patrons! Do they want you incorporating tech in story time, or do they feel their children get enough of that elsewhere? Would parents like a lesson in your online services, such as OverDrive, or an actual techy story time for the kids?
Challenge: No one is dancing with you – what do you do?

2.       Remind parents at the beginning that they are expected to participate

6.       Model dancing with a child, and then hand them back to their grownup, expecting the grownup to keep the fun going.

7.       Make sure everyone understands that this isn’t a show – it is meant to be interactive for the whole family!

Try playing an instrument! Some of us play guitar and ukulele – most children’s songs are very simple and only require a few easy chords! If you want to use a “cheat,” one member recommends the Guitar Buddy
1. (Clapping hands on lap and together)
Bread and butter, marmalade and jam,
Let’s say hello as loudly as we can – HELLO!
(Repeat, saying hello quietly, slowly, and quickly) End on soft so that voices are quiet and ready to begin!

(For babies, you can open and shut their arms and tickle them on the "creep them" part. For older children, remind parents that it's really important for them to use their fingers to help develop writing skills.)

Question: A parent says (loudly!) that they miss the other storytime person! What do you do?

1. This is a great opportunity to remind parents that your child is going to have a lot of teachers, and every teacher will have different qualities. There’s no wrong or right way to do storytime! Three people can do the same storytime and each do it differently. It’s good for kids to see people do things in different ways.

2. It’s hard to follow someone else’s storytime plan or do their opening/closing songs – it’s ok to put your own special twist on it.


3. It can be hard for families to move up from one age group to the next. Just encourage the parents that their children ARE READY to move on and they’ll do great!
4. Some parents may also move back to a younger group for the environment/librarian they are more comfortable with. But eventually, the children will get bored and be ready to move up!

5. Ultimately, being told they miss the other person is a HUGE compliment to that librarian. It’s ok to acknowledge that yes, that librarian is fantastic, but unfortunately he/she isn’t here today (or has retired, or whatever the situation may be).

6. If you’re told that a family goes somewhere else now for storytime, you can say “I’m so happy that you found somewhere you love.” Take the high road, even if it hurts your feelings.

7. When multiple libraries are available, it is fine for families to try storytimes at various locations. We want them to find a place they like! You can even partner with other libraries to promote one another’s storytimes. 8. This happens to librarians all the way up the chain – not just storytime librarians! Patrons may be disappointed when a head librarian or other administrator is replaced, but eventually they forget the former person and YOU will become their favorite librarian J Make them love you and they will!


WILD CARD: Audience poses a question – What is your favorite rhyme or fingerplay?

By this point, everyone was getting anxious to head out for the evening, so we cut things off here.  This was a wonderful discussion with some truly fabulous and dedicated librarians.  We hope to see them again at future conferences and on Facebook! Remember to follow the Ohio Storytime Underground page to connect with other Ohio librarians! Thanks!

I wanted to read the fabulous Book O'Beards by Donald Lemke in a family story time, and needed a fun rhyme to go with it. 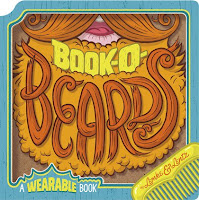 Thank you, Literary Hoots, for this hilarious and fun felt rhyme! The kiddos loved it so much that we had to do it twice! 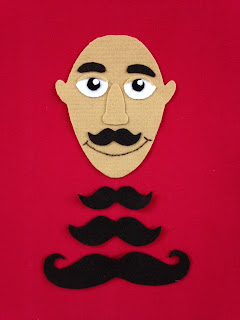 There once was a man named Mr. Lou,
He had a mustache that grew and GREW! 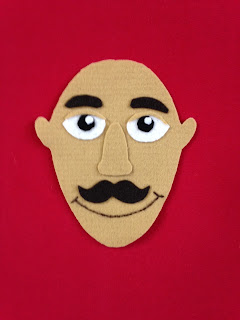 On Monday it was as tiny as his nose. 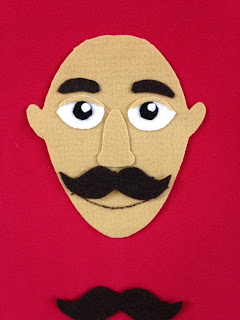 By Tuesday, on and on it grows! 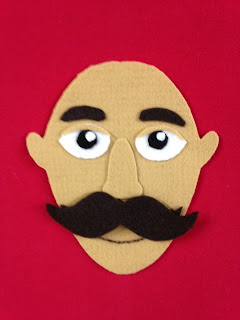 By Wednesday, it stretches as far as his ears! 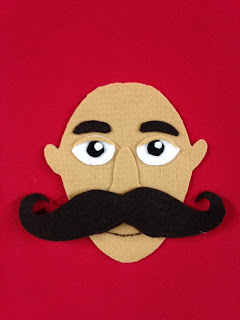 By Thursday, it looks as if it has grown for years!
But on Friday, Mr. Lou caught the flu,
Aaah, aaah, aaaaaahhhhchooooo!
On the last "achoo," I pulled the mustaches off his face and threw them at the kids!  They shrieked with delight!
The wording is a little awkward, but they are so interested in what's happening to Mr. Lou that I don't think anyone really notices.
This was really fun and I can see us using this felt set and rhyme over and over again in future story times!
Thanks for stopping by!

Thanks to Mel's Desk for hosting the roundup this week!  Flannel Friday is for anyone interested in finding and sharing great flannel board ideas!  You can learn more about Flannel Friday and how to participate here.﻿
Posted by Miss Kristen at 2:29 PM 2 comments: